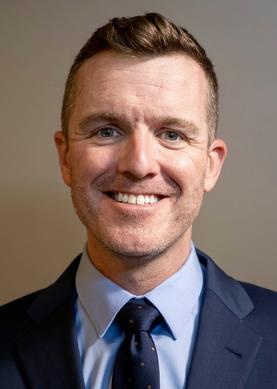 Dr. Michael Chambers is a Western Pennsylvania native. He obtained his bachelor’s degree in Music Education from Grove City College in Grove City, PA. Dr. Chambers taught middle and high school instrumental music for several years prior to earning his Doctor of Dental Medicine degree at the University of Pittsburgh School of Dental Medicine in 2012. While at Pitt, he received the American Association of Oral and Maxillofacial Surgery Radiology Student Achievement Award and was inducted into Omicron Kappa Upsilon – the national dental honor society.

He began his residency in Oral and Maxillofacial Surgery in 2012 at the University of Pittsburgh Medical Center. He completed his medical degree from the University of Pittsburgh in 2016, where he also was inducted into the Arnold P. Gold Humanism Honor Society. This society honors students who demonstrate high standards of humanistic clinical care, leadership, compassion, and dedication to service. Dr. Chambers completed an internship in General Surgery in 2017. During his residency training in Oral and Maxillofacial Surgery he worked at UPMC Presbyterian/Montefiore, Children’s Hospital of Pittsburgh of UPMC, Mercy Hospital of Pittsburgh, and the Veteran’s Affairs Medical Center.

Dr. Chambers joined Conestoga Oral & Maxillofacial Surgery in 2018.  He and his wife have enjoyed all that Central Pennsylvania has to offer and look forward to continuing to establish long-term, deep roots in Lancaster County, especially within his church and the arts community alike. In his free time, Michael enjoys spending time with his beautiful wife, Krista, also a Grove City College graduate, and former middle/high school vocal music teacher. He joined the Auscultation Brass shortly after moving to the area and has enjoyed dusting off his trombone and playing with this group of talented physicians/musicians.  His hobbies include the visual arts, skiing, and spending time outdoors on his road bike. Him and his wife have two children (Evelyn and Benjamin).