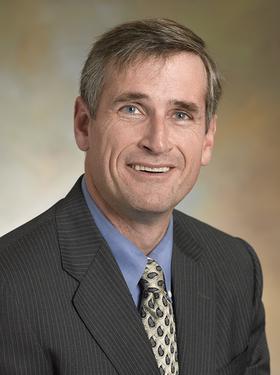 Dr. Robert Belser, Jr. grew up in Lancaster, Pennsylvania. He followed the quite obvious hints from his trumpet playing father, uncle and cousin and filled out their quartet starting the trumpet in elementary school.  He enjoyed the variety of instrumental opportunities in the Manheim Township School District and graduated from high school in 1983. He continued playing the trumpet while studying Chemistry among other things at Franklin & Marshall University, graduating in 1987.

The trumpet got fairly dusty as he attended medical school at the University of Pennsylvania and four years later, he headed out to Cleveland, Ohio, with his new bride, Julia, for his internship and otolaryngology-head and neck surgery residency (better known as Ears, Nose and Throat or ENT) at Case Western Reserve University.

Five years later, in 1996, he returned to Lancaster with the family grown to a total of five (Abigail, Phoebe and Bobby).  He was honored to join Dr. Dave Rosenfeld at Lancaster Otolaryngology.  He enjoys playing with the Auscultation Brass, the Lancaster British Band and maybe most fondly with his family brass quartet(Abigail-French horn, Phoebe-Euphonium, Bobby-trumpet), all of whom have made appearances with the Auscultation Brass at one time or another!

If not practicing medicine or the trumpet, you may find him perfecting his backhand, trying to straighten out a five iron, or raking leaves!